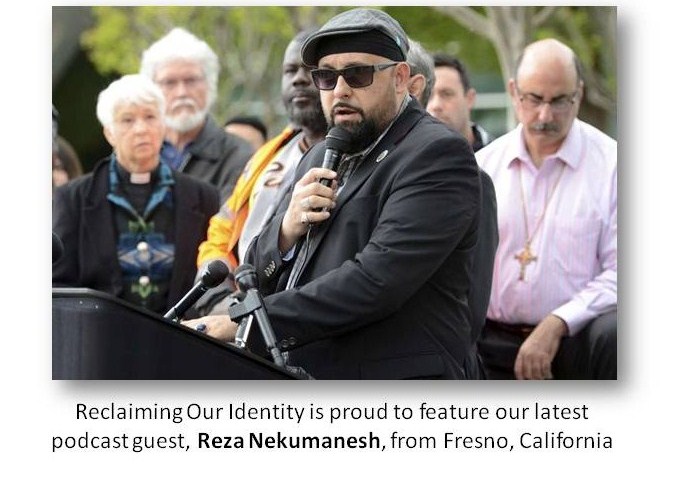 Listen to our podcast interview with Reza Nekumanesh to learn about the successes and struggles of the Muslim American community in Fresno, his views on the Muslim obligation to stand against the oppression of the innocent, and his reflection on a visit to an ICE detainment facility.

About Our Guest (Reza Nekumanesh)

Reza Nekumanesh has a M.A. Islamic Leadership for the Bayan College of Claremont-Lincoln University), a B.A. Philosophy & Religious Studies from California State University, and he is currently working on completing a Certificate in Public Theology and Social Justice at the American Baptist Seminary of the West/Graduate Theological Union. His major areas of research are Shi’a Law and Jurisprudence, Theology, Islamic History, the teachings and evolving ideologies of Hajj Malik Shabazz (Malcolm X), the American-Muslim identity and experience, environmental ethics, religious violence, non-profit management and inter and intra-faith cooperation. Reza has been serving the Muslim community in Fresno for the past 20 years.  He is a strong advocate for social, racial, economic and environmental justice and interfaith understanding and cooperation. As a part of the community he serves on many boards including an organization called Faith in the Valley.

About Faith in the Valley

Faith in the Valley is a new faith-based grassroots community organization in California’s Central Valley of 120 congregations representing over 100,000 families in Fresno, Kern, Merced, Stanislaus and San Joaquin Counties. Their work is led by volunteer leaders who are among the people most impacted by equity issues: low-wage workers, young people, immigrants, and the formerly incarcerated.

They are part of PICO California, the largest faith based community organizing network in California, with an institutional membership of 485 congregations from more than a dozen faith traditions across the state. They are also part of the PICO National Network. Together, they are anchored in a prophetic theology of resistance that helps people understand the systemic roots of their shared suffering, as well as articulate an alternative narrative that liberates individuals and communities from the dominant cultural norms that perpetuate inequity.
https://faithinthevalley.org/

About the Islamic Cultural Center of Fresno

Since its opening in 2001, the Islamic Cultural Center of Fresno has worked to promote an un-distorted, sincere and peaceful image of Islam and the American Muslim community.   They have worked to do so by building community and relationships with religious organizations and centers, schools and districts, civic leaders and offices, and more.

In addition to religious and cultural understanding programs, ICCF is civically engaged (registering and educating voters, operating as a polling site, and bringing in those in office or running for office for encounters) and works to bring about understanding between its congregants and elected officials for greater community building. ICCF is also a strong proponent of both inter and intra faith relationship building.  As an interfaith leader, ICCF and its members are actively involved in just about every interfaith event and project in the community.  As an intra-faith leader, ICCF actively leads the way in engaging all centers and organizations within the Muslim community to foster peace and to develop a greater sense of the Muslim American identity and what that means in the Central Valley.
http://icfresno.org/

Want to learn more about the US ICE Detention Centers?

Email us (IqamaMagazine@gmail.com) to learn more about our podcast series and our many features including: family, recipes, games/puzzles, scholarships, marriage, halal road trip tours, and faith based material for Islamic classrooms!